Greg is an Army Veteran that currently resides in Coeur d’ Alene Idaho. Greg grew up in North Idaho and has been with the Northwest Outfitters team for over five years and his love for fishing is hard to rival. He first fell in love with fly fishing when he was eleven years old while fishing with his cousin on the North Fork of the Coeur d’ Alene River. He says watching his dry fly get crushed by a cutty that came out of the depths was the most amazing thing he’d ever seen, while he calls that first occurrence dumb luck, everyone else who knows him would call it his start. Greg is also the owner of Gone Fishing Artistries. He creates fish taxidermy and habitat and is also an instructor at the Second Nature School of Taxidermy. His attention to detail, hard work ethic, and involvement in the Veteran community is what sets him apart, qualities that go hand in hand with his career as a fly fishing guide. 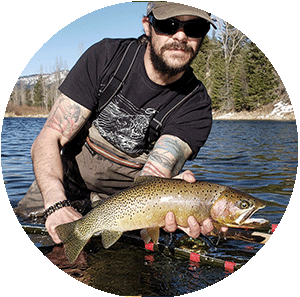 Excellent Fishing in Less Than 30 Minutes

We are the only brick and mortar fly shop in North Idaho with permits for the upper North Fork Coeur d’Alene river. Our Idaho Outfitter permits and USDA Forest Service Permits allow us to Walk and Wade the North Fork of Couer d ‘Alene River in it’s entirety.